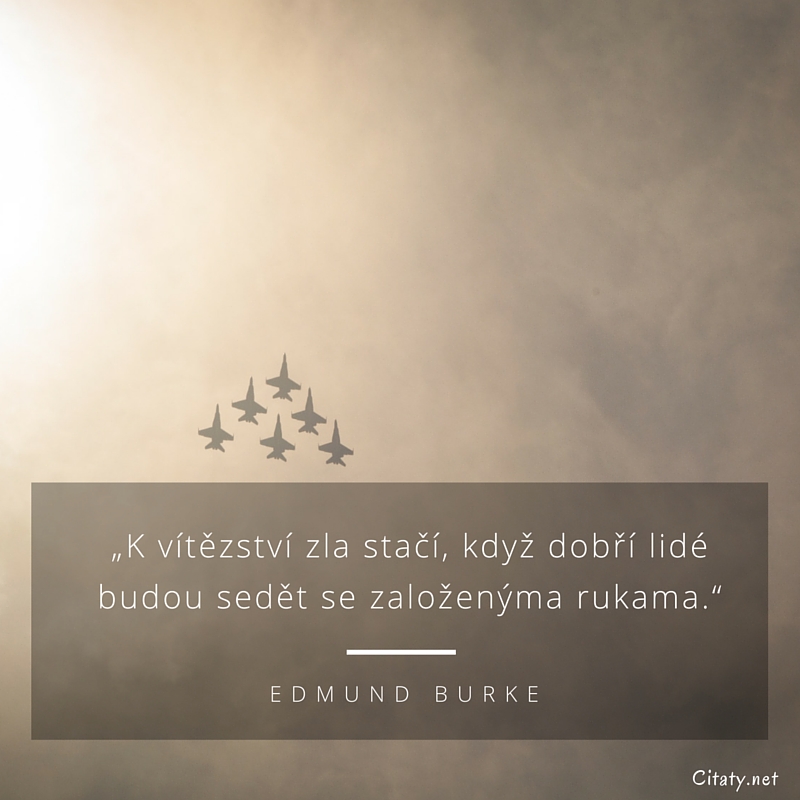 „Those who don't know history are doomed to repeat it.“

„Woman is not made to be the admiration of all, but the happiness of one.“

„All that is necessary for the triumph of evil is that good men do nothing.“

This is probably the most quoted statement attributed to Burke, and an extraordinary number of variants of it exist, but all without any definite original source. They closely resemble remarks known to have been made by the Utilitarian philosopher John Stuart Mill, in an address at the University of St. Andrew (1 February 1867) http://books.google.com/books?id=DFNAAAAAcAAJ&pg=PA36&dq=%22Bad+men+need+nothing+more+to+compass+their+ends,+than+that+good+men+should+look+on+and+do+nothing%22&hl=en&sa=X&ei=RUh5U6qWBLSysQT0vYGAAw&ved=0CEEQ6AEwBA#v=onepage&q=%22Bad%20men%20need%20nothing%20more%20to%20compass%20their%20ends%2C%20than%20that%20good%20men%20should%20look%20on%20and%20do%20nothing%22&f=false : Bad men need nothing more to compass their ends, than that good men should look on and do nothing. The very extensively used remarks attributed to Burke might be based on a paraphrase of some of his ideas, but he is not known to have ever declared them in so succinct a manner in any of his writings. It has been suggested that they may have been adapted from these lines of Burke's in his Thoughts on the Cause of the Present Discontents http://oll.libertyfund.org/Texts/LFBooks/Burke0061/SelectWorks/HTMLs/0005-01_Pt02_Thoughts.html (1770): "When bad men combine, the good must associate; else they will fall one by one, an unpitied sacrifice in a contemptible struggle." (see above)
:This purported quote bears a resemblance to the narrated theme of Sergei Bondarchuk's Soviet film adaptation of Leo Tolstoy's War and Peace, produced in 1966. In it the narrator declares "All that is necessary for evil to triumph is for good men to do nothing", although since the original is in Russian various translations to English are possible. This purported quote also bears resemblance to a quote widely attributed to Plato, that said "The penalty good men pay for indifference to public affairs is to be ruled by evil men." It also bears resemblance to what Albert Einstein wrote as part of his tribute to Pablo Casals: "The world is in greater peril from those who tolerate or encourage evil than from those who actually commit it."
: More research done on this matter is available at these two links: Burkequote http://www.tartarus.org/~martin/essays/burkequote.html & Burkequote2 http://www.tartarus.org/~martin/essays/burkequote2.html — as the information at these links indicate, there are many variants of this statement, probably because there is no known original by Burke. In addition, an exhaustive examination of this quote has been done at the following link: QuoteInvestigator http://quoteinvestigator.com/2010/12/04/good-men-do/.DisputedVarianta: The only thing necessary for the triumph of evil is for good men to do nothing

„It looks to me to be narrow and pedantic to apply the ordinary ideas of criminal justice to this great public contest. I do not know the method of drawing up an indictment against a whole people.“

Second Speech on Conciliation with America (1775)Kontext: It looks to me to be narrow and pedantic to apply the ordinary ideas of criminal justice to this great public contest. I do not know the method of drawing up an indictment against a whole people. <!-- Works of Edmund Burke Volume ii, p. 136

Letter to a Member of the National Assembly (1791)Kontext: Men are qualified for civil liberty in exact proportion to their disposition to put moral chains upon their own appetites, — in proportion as their love to justice is above their rapacity, — in proportion as their soundness and sobriety of understanding is above their vanity and presumption, — in proportion as they are more disposed to listen to the counsels of the wise and good, in preference to the flattery of knaves. Society cannot exist, unless a controlling power upon will and appetite be placed somewhere; and the less of it there is within, the more there must be without. It is ordained in the eternal constitution of things, that men of intemperate minds cannot be free. Their passions forge their fetters.

„The rights of the people are every thing, as they ought to be in the true and natural order of things.“

Final Speech at the Trial of Warren Hastings, 28 May 1794; in The Works of the Rt. Hon. Edmund Burke, vol. 8 (1877) 5th edition, p. 51On the Impeachment of Warren Hastings (1788-1794)Kontext: On one side, your lordships have the prisoner declaring that the people have no laws, no rights, no usages, no distinctions of rank, no sense of honor, no property; in short that they are nothing but a herd of slaves to be governed by the arbitrary will of a master. On the other side, we assert that the direct contrary of this is true. And to prove our assertion we have referred you to the institutes of Ghinges Khân and of Tamerlane: we have referred you to the Mahomedan law, which is binding upon all, from the crowned head to the meanest subject; a law interwoven with a system of the wisest, the most learned, and most enlightened jurisprudence that perhaps ever existed in the world. We have shown you, that if these parties are to be compared together, it is not the rights of the people which are nothing, but rather the rights of the sovereign which are so. The rights of the people are every thing, as they ought to be in the true and natural order of things.