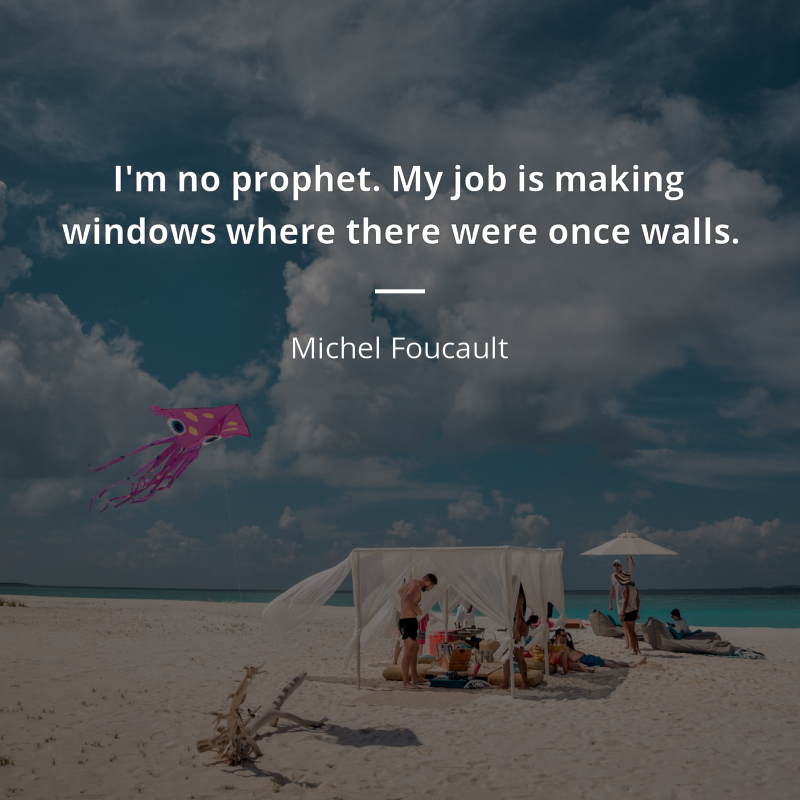 „I'm no prophet. My job is making windows where there were once walls.“

„You may have killed God beneath the weight of all that you have said; but don't imagine that, with all that you are saying, you will make a man that will live longer than he.“

Zdroj: The Archaeology of Knowledge & The Discourse on Language

„Maybe the target nowadays is not to discover what we are but to refuse what we are.“

„There is no power relation without the correlative constitution of a field of knowledge, nor any knowledge that does not presuppose and constitute at the same time power relations“

„Where there is power, there is resistance.“

Zdroj: The History of Sexuality, Volume 1: An Introduction

„Do not think that one has to be sad in order to be militant, even though the thing one is fighting is abominable.“

„I don't feel that it is necessary to know exactly what I am. The main interest in life and work is to become someone else that you were not in the beginning. If you knew when you began a book what you would say at the end, do you think that you would have the courage to write it? What is true for writing and for a love relationship is true also for life. The game is worthwhile insofar as we don't know what will be the end. My field is the history of thought. Man is a thinking being.“

Varianta: Knowledge is not made for understanding; it is made for cutting.Zdroj: The Foucault Reader: An Introduction to Foucault's Thought

„[T]hus one should not think that desire is repressed, for the simple reason that the law is what constitutes both desire and the lack on which it is predicated. Where there is desire, the power relation is already present: an illusion, then, to denounce this relation for a repression exerted after the event.“

Zdroj: The History of Sexuality, Volume 1: An Introduction

Zdroj: Madness and Civilization: A History of Insanity in the Age of Reason

„Meaning was no longer read in an immediate perception, and accordingly objects ceased to speak directly: between the knowledge that animated the figures of objects and the forms they were transformed into, a divide began to appear, opening the way for a symbolism more often associated with the world of dreams.“

Part One: 1. Stultifera NavisHistory of Madness (1961)Kontext: Meaning created links so numerous, so rich and involved that only esoteric knowledge could possibly have the necessary key. Objects became so weighed down with attributes, connections and associations that they lost their own original face. Meaning was no longer read in an immediate perception, and accordingly objects ceased to speak directly: between the knowledge that animated the figures of objects and the forms they were transformed into, a divide began to appear, opening the way for a symbolism more often associated with the world of dreams.

„In short, penal reform was born at the point of junction between the struggle against the super-power of the sovereign and that against the infra-power of acquired and tolerated illegalities.“

Zdroj: Discipline and Punish (1977), Chapter Two, Generalized Punishment, pp.87Kontext: It proved necessary, therefore, to control these illicit practices and introduce new legislation to cover them. The offenses had to be properly defined and more surely punished; out of this mass of irregularities, sometimes tolerated and sometimes punished with a severity out of all proportion to the offense, one had to determine what was an intolerable offense, and the offenders had to be apprehended and punished. With the new forms of capital accumulation, new relations of production and the new legal status of property, all the popular practices that belonged, either in a silent, everyday, tolerated form, or in a violent form, to the illegality of rights were reduced by force to an illegality of property. In that movement which transformed a society of juridico-political levies into a society of the appropriation of the means and products of labour, theft tended to become the first of the great loopholes in legality. Or, to put it another way, the economy of illegalities was restructured with the development of capitalist society. The illegality of property was separated from the illegality of rights. This distinction represents a class opposition because, on the one hand, the illegality that was to be most accessible to the lower classes was that of property – the violent transfer of ownership – and because, on the other, the bourgeoisie was to reserve to itself the illegality of rights: the possibility of getting round its own regulations and its own laws, of ensuring for itself an immense sector of economic circulation by a skillful manipulation of gaps in the law – gaps that were foreseen by its silences, or opened up by de facto tolerance. And this great redistribution of illegalities was even to be expressed through a specialization of the legal circuits: for illegalities of property – for theft – there were the ordinary courts and punishments; for the illegalities of rights – fraud, tax evasion, irregular commercial operations – special legal institutions applied with transactions, accommodations, reduced fines, etc. The bourgeoisie reserved to itself the fruitful domain of the illegality of rights. And at the same time as this split was taking place, there emerged the need for a constant policing concerned essentially with this illegality of property. It became necessary to get rid of the old economy of the power to punish, based on the principles of the confused and inadequate multiplicity of authorities, the distribution and concentration of the power correlative with actual inertia and inevitable tolerance, punishments that were spectacular in their manifestations and haphazard in their application. It became necessary to define a strategy and techniques of punishment in which an economy of continuity and permanence would replace that of expenditure and excess. In short, penal reform was born at the point of junction between the struggle against the super-power of the sovereign and that against the infra-power of acquired and tolerated illegalities.