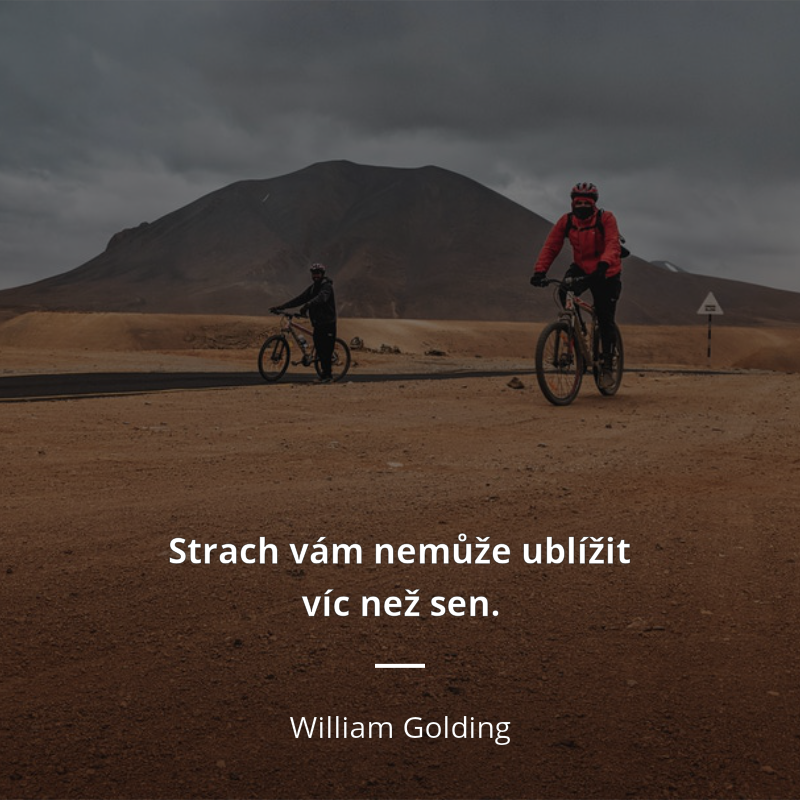 „The greatest ideas are the simplest.“

„I will tell you what man is. He is a freak, an ejected foetus robbed of his natural development, thrown out into the world with a naked covering of parchment, with too little room for his teeth and a soft bulging skull like a bubble. But nature stirs a pudding there…“

„The thing is - fear can't hurt you any more than a dream.“

„We did everything adults would do. What went wrong?“

„My yesterdays walk with me. They keep step, they are gray faces that peer over my shoulder.“

„Maybe there is a beast… maybe it's only us.“

„Ralph wept for the end of innocence, the darkness of man's heart, and the fall through the air of the true, wise friend called Piggy.“

—  William Golding, kniha Pán much
Lord of the Flies (1954), Context: His voice rose under the black smoke before the burning wreckage of the island; and infected by that emotion, the other little boys began to shake and sob too. And in the middle of them, with filthy body, matted hair, and unwiped nose, Ralph wept for the end of innocence, the darkness of man's heart, and the fall through the air of the true, wise friend called Piggy. Ch. 12: The Cry of the Hunters

„Simon's head was tilted slightly up. His eyes could not break away and the Lord of the Flies hung in space before him.“

—  William Golding, kniha Pán much
Lord of the Flies (1954), Context: Simon's head was tilted slightly up. His eyes could not break away and the Lord of the Flies hung in space before him. "What are you doing out here all alone? Aren't you afraid of me?" Simon shook. "There isn't anyone to help you. Only me. And I'm the Beast." Simon's mouth labored, brought forth audible words. "Pig's head on a stick." "Fancy thinking the Beast was something you could hunt and kill! You knew, didn't you?" said the head. For a moment or two the forest and all the other dimly appreciated places echoed with the parody of laughter. "You knew, didn't you? I'm part of you? Close, close, close! I'm the reason why it’s no go? Why things are what they are?" Ch. 8: Gift for the Darkness

„Reason, when it is refined into logic, has something to offer but only in terms of itself and depends for its effect and use on the nature of the premise.“

—  William Golding
Context: Reason, when it is refined into logic, has something to offer but only in terms of itself and depends for its effect and use on the nature of the premise. That useful argument as to how many angels can stand on the point of a needle would turn into nothing without the concept of angels. I took a further step into my new world. I formulated what I had felt against a mass of reasonable evidence and saw that to explain the near infinite mysteries of life by scholastic Darwinism, by the doctrine of natural selection, was like looking at a sunset and saying "Someone has struck a match". As for Freud, the reductionism of his system made me remember the refrain out of Marianna in Moated Grande — "He cometh not, she said, she said I am aweary aweary, O God that I were dead!". This was my mind, not his, and I had a right to it.... We question free will, doubt it, dismiss it, experience it. We declare our own triviality on a small speck of dirt circling a small star at the rim of one countless galaxies and ignore the heroic insolence of the declaration. We have diminished the world of God and man in a universe ablaze with all the glories that contradict that diminution. Of man and God. We have come to it, have we not? I believe in God; and you may think to yourselves — here is a man who has left a procession and gone off by himself only to end with another gasfilled image he towns round with him at the end of the rope. You would be right of course. I suffer those varying levels or intensities of belief which are, it seems, the human condition. Despite the letters I still get from people who believe me to be still alive and who are deceived by the air of confident authority that seems to stand behind that first book, Lord of the Flies, nevertheless like everyone else I have had to rely on memories of moments, bet on what once seemed a certainty but may now be an outsider, remember in faith what I cannot recreate. "Belief and Creativity" Address in Hamburg (11 April 1980); as quoted in Moving Target https://books.google.com.mx/books?id=2SwUAAAAQBAJ&source=gbs_navlinks_s (2013), Faber & Faber